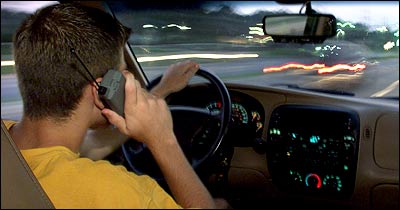 As a citizen of California, I'm pleased with the new law SB1613 banning cell phone use while operating a motor vehicle. Unfortunately, this new legislation signed into law in September 2006 by our state Governor Aww-nold Schwarzeneggar will not go into enforceable effect until January 1, 2008.

For this reason, we can all expect another 13 months of needless roadway deaths, delays and general traffic mayhem in Orange County, California due to the insistence and "positive me-enforcement" of Orange County's finest and most selfish of citizens and their failure to keep their fucking eyes on the road.

Let's all grasp the truth of the following equation: 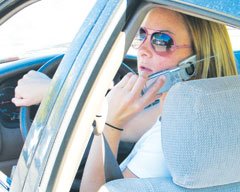 Hey dumbass, put down your goddamned cell-phone and drive!

The Human Factors and Ergonomical Society claims that 2,600 deaths and over 330,000 injuries are caused by cell phone using drivers in the U.S. each year.

Why is it that the upright-walking citizens of the United States seem to be the last to "get it"?

Most nations around the world have wisely banned the use of cell phones while driving all together.

In the progressive, cutting-edge, forward-thinking, United States of America, however, only 4 out of 50 states have legal bans on cell phones, and several states have tried to introduce legislation only to fail to get the votes:

Housing affordability in Orange County: Nothing to see here. Move along. 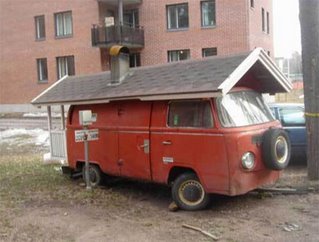 Like we really need reports from the California Building Industry Association to tell us these things, but OK, here it is. California is the state with the second least affordable housing.

Of the total housing on offer in Orange County, only 3.8% is considered "afforable".

Now, let's see... I'd like a single-family, 3 bedroom, 2 1/2 bathroom house with a front and backyard, and two car garage in Orange County, California.

Well, how much should I expect to fork over?

And before you start thinking to yourself: "Jeeze, that must be a mansion"!, forget about it!

You'll have to sift through a long inventory list of tiny stucco shitboxes with no basements. You put the same OC home on the market in Indianapolis, Indiana your talking $115,000 tops! 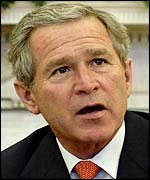 Can things get much worse for the President of the United States?

Look, if I were George, I wouldn't let that new 31% approval rating get him down.
I mean, come on! There is plenty of time and opportunity for American opinions to hit record rock bottom as the Texan originally planned.
Just consider this: 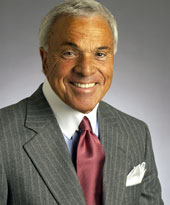 OK, but ah...wait a minute. For a decline in available homes, we need to sell those available homes, so that they're not available anymore. Right?
How does one sell available homes when they are perceived to be overpriced and consumers consider home values to be on the verge of even greater decline in the future?
Since inflation remains pretty much unchecked, what happens should the Federal Reserve raise rates in the future?
Posted by Markus Arelius at 11/15/2006 02:37:00 PM 0 comments

Prices remain high at an average of $625,000 per home, but the trend is slowly declining.
But how much longer can such high price points be sustained?
According to Mark Mueller of the O.C. Business Journal: "The number of homes sold in the county dropped 24.9% to 2,715 in October from a year earlier. It’s the 12th straight month of year-over-year declines in sales."
.....Did you hear that?
Where is that scary music coming from...?
Posted by Markus Arelius at 11/15/2006 02:25:00 PM 0 comments