(meteorology) A stormy southwest wind on the southern Mediterranean coast of Spain and in the Straits of Gibraltar; it occurs with a low advancing from the west in late autumn, winter, or early spring, and is often accompanied by thunderstorms and violent squalls.

Is it too much to ask for the storm to stop and some normalcy to return?

For now the denial and incessant waiting continues. 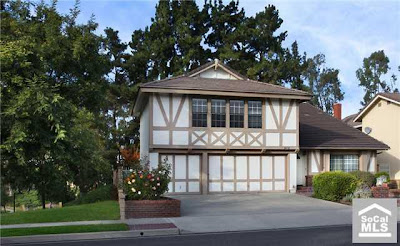 This beautiful home located in a lovely and rather secluded community with nice green belts and parks in Lake Forest, California was purchased for just shy of one million dollars ($910,000) back on October 24, 2006. It was then bought by an investor at foreclosure auction for $618,500 cash on May 28, 2010.

Following listing in late September 2010, 155 days on the market later this home remains priced at $729,000, which in case the seller forgot is only slightly less the 10 TIMES the median income for this small city. Only the investor knows how much was poured in to this adobe between May and September to make it move-in ready. Laminate wood flooring is nice, but not very expensive. The $110,500 proft being targeted provides us only an inkling.

A local comparable sale on December 3, 2010 went for $730,000 - same style and sized home, similar location - a signal to the seller that $729,000 is a perfectly reasonable asking price too. Will the angry real estate gods of Orange County to shine down with favor once more upon a turbulent sea of Lake Forest home sales signed at prices well below $650,000?

The neighborhood is nice and ideal for a family to live. The schools in the area are quite good. You can check out the schools' API scores here (type in the school name).